This is me playing with the Covid figures.  Warning – I’m not an epidemiologist, gave up Maths at age 16, and stopped teaching economics in 1983.  For those reasons, and the simple hunt for truth, all and any corrections will be gratefully received and acknowledged.

So, to business. The Prime Minister’s recent speech – predicted by an enthusiastic press to herald the end of lock-down in the UK – turned out to be a damp squib – a well presented damp squib, indeed, but still a quiet phut. There’s plenty of comment about the proposals – mostly asking what precisely the proposals are – but I’ve got into a minor debate about the calculation of the alert level.  The speech was illustrated by PowerPoint slides – politicians have, after thirty years, caught up with the rest of the world – and one of them was this: 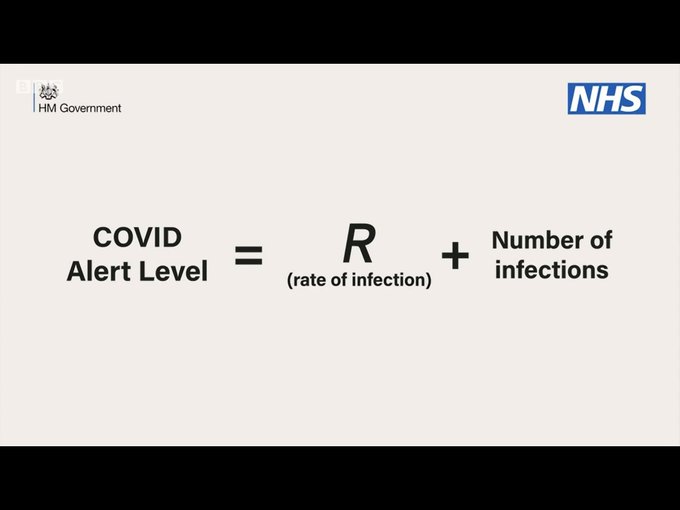 A worked example follows.  Let’s assume the rate of infection is .9 (we’re told it is just under one).  This means that, on average, an infected person will pass on the virus to .9 other people. Let’s also say that 200,000 people are known to be infected. This would make an alert level of 200,000.9, using that diagram. A dramatic halving of the infection rate would take it to 200,000.45, which is no difference at all.  In fact, it’s plain daft.  What I suspect they mean is that the alert level is determined by two factors – the government’s judgement of the number of people carrying the disease and the rate of re-infection.  That’s at least logical, but not very objective.

But initially, I played with the equation as if it really were an equation, and asked how could it become something useful and sensible. Let’s change the plus sign to a times sign – and for brevity, change ‘number of infections’ to n.  What could we get from

Well, it would be the number of people who are going to be infected by the current bunch of infected people. 200,000 x .9 = 180,000 in real money.  Going forward, we have now to distinguish between the currently infected, and the next lot of infected – let’s call them n1 and n2. Which leaves us with

Now, the newly infected will also pass the virus on – let’s assume also at a rate of .9 people per person.  In this iteration, R x n2 = n3, the next lot of unfortunates – 162,000 of them. So how many people will suffer from Covid19 in the UK in total ? Well, it’ll be n1 + n2 + n3 + n4 … and so on.  This series will be familiar to those who have studied basic economics – it’s the multiplier effect. When business or government spend £100m on a new project, the national income will initially go up £100m, but those who receive that money will spend it, having saved some, and those who receive that second round of spending will spend their portion, having saved some.  That process, too, goes on: it will peter out in the end, but when that will happen will depend on people’s propensity to save[1]. If we save 10% of our income, then the final effect is ten times the first injection. If we save 25%, it’s just four times as much.

So, coming back to the Covid example: how many people will get the bug if there are 200,000 currently infected, and R is .9 ?  The answer is not 180,000, but many more, because of the virus multiplier.  It’s a simple progression, and if R is .9, it comes to 10, I’m afraid to say.  It adds up to a total of 2 million; every currently infected person starts a chain that leads to ten other infections. On the positive side, many will get a mild dose and shake it off quickly; it’s likely that plenty of people have done that already without knowing.  On the negative side, many won’t, especially fat old men like me.  And remember, the one thing all sides are agreed on is that we don’t actually know how many people are infected, and the current number is a considerable underestimate. If we have twice as many carriers, then there will be 4 million infections, and if the death rate is 1%, 40,000 will die.

(Footnote: as I write, 223,000 people have tested positive and 32,000 have died. You can’t really say this means there is a 14% death rate, due to the uncounted positives in the community.  In any case, for individuals, death rates are strongly age related. There are also the Covid deaths not counted as Covid related, which is why epidemiologists are looking at ‘surplus deaths’ as the best measure of death numbers).

[1] In the real world, leakages from the process also include taxation (which is why additional government spending £100 doesn’t cost them £100) and spending on imports. Taxation is about 35% of GNP, and imports also over 30%.  Thus, the real multiplier is not 9 but 2 or less.

I thought this was a complication not relevant to a comparison of the economic and infection multipliers, but, on reflection, it is.  Just as we import goods, we import people. They are the source of additional foreign infections which complicate the calculation – and policy.  Several countries that have got on top of things have had to take action against new outbreaks from outside.  This is relevant to the UK, where the government and its advisers initially took a laissez-faire attitude to entrants. The Guardian tells us that 95.000 have entered the country since the emergency started, and that will provide new sources of infection. If 5% have Covid19, then an additional 47,500 people will get the disease (based on 95,000 x 1/1-.9).

Footnote – There is a fine article here which explains the above more scientifically, and shows why it is soooo much better to place greatest reliance on measures to slow the spread rather than cure the disease once caught.