It’s pretty difficult to pick on one of the many dishonesties that flew around the Tory leadership campaign. The more idiotic concerned EU Brexit – a bad idea made much worse by the layers of lies laid across it.  But an old friend raised his head, with that appealing combination – ideology pretending to be science. The bloody Laffer curve, now called ‘boosterism’: Boris Johnson thinks his proposed tax cuts won’t reduce government receipts. He says it, and Trump agrees.

I guess you’ll have heard of the idea that if we cut tax rates, the government will actually raise more tax revenue, because it will increase the willingness to work harder (and reduce the incentive to engage in elaborate tax avoidance measures).  The Laffer curve comes from a back-of-the-envelope drawing by Arthur Laffer himself (actually, back of a napkin).  You start with a graph that has tax rates, 0-100% on one axis and tax yield, say 0-100% of GNP (or sums of money), on the other. Your line starts with a 0% tax rate, which raises no tax (obviously).  Increase the tax rate, and you raise more tax.  Up shoots the line. However, it can’t go on forever.  Charging 100% tax will raise virtually no tax at all: why should anyone work or provide products for free ?  Just look at what happened when a poorly designed tax change meant doctors were being asked to work for nothing.  So there must be a turning point at which increasing tax rates actually reduces the money government gets, where the line linking rates to yield begins to flatten, and then turns downwards.  And if we are at that level, reducing the percentage tax rate will actually boost the Treasury’s receipts.

It’s superficially appealing.  Like the left’s view that modern monetary theory, or catching multinationals, or both, mean we can spend what we like on public services, it offers the attractive option of spending more without paying more.  But what did your old Dad tell you about things that sound to be good to be true ? Yep, this is one of them.  Because:

The killer point is that tax cuts for incentive have been tried, and have failed.  Reagan tried it, and the budget deficit soared.  Trump is trying it, buoyed by the same predictions – “some proponents … even argued that its macroeconomic effects would be so large that the bill would actually increase revenues” – but, sadly, punished by the same result.  The latest predictable report can be found here.  The state of Kansas provides perhaps the most egregious case-study: its Republican legislators cut its taxes in 2012, promising ‘an adrenaline shot in the arm for the economy’[1].  Laffer himself assured them they would make more money that way.  They didn’t: of course they didn’t. The result was close to catastrophe.  Tax receipts fell $700m in the first year.  Road repairs stalled.  Health care in rural areas declined.  The courts ruled that the cuts to the schools system (some had to close one day a week, and subsidies to poorer areas were abolished) were alarming enough to be unconstitutional (the governor promptly tried to defund courts ruling on such issues). This makes the original mistake the more deeply worrying.  Instead of saying “we got it wrong – let’s return to the original tax base”, the right will say “the budget is out of balance – we can no longer afford the current level of public services.” First in line is usually social benefits (2): last will be defence. It will happen under Trump: watch this space. 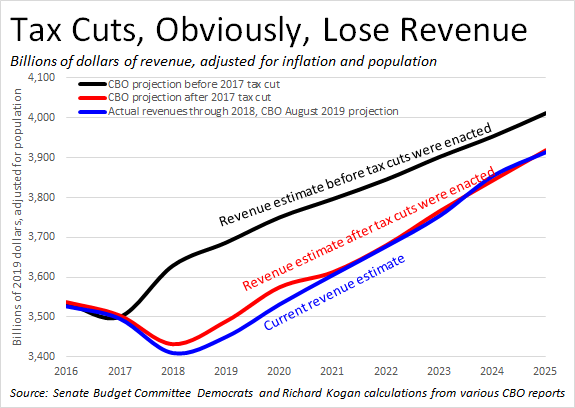 So, an idea that doesn’t work, and will worsen public finances.  I’m far from the only person saying this – see another blog,  by Richard Murphy, a tax expert that the BBC invited to their studios but decided not to use.  It’s truly striking how unalarmed conservatives are by all this.  Centrist or radical government causing the same deficit by more generous social benefits, better schools and transport, shorter hospital waiting lists would get both barrels from party and press about fiscal irresponsibility. But deficits caused by tax cuts for the rich, not so much.

[1] An independent study showed that higher taxed districts had been growing faster than lower taxed districts in the previous 8 years.  But the Kansas Republicans, like Michael Gove, had had enough of experts.

(2) Ironically, the highest disincentive taxation in our system is on social security payments.  People on Universal Credit who work and don’t get or earn above the work allowance get their benefit cut when they earn more.  Effectively, they pay tax on every extra £1 they earn of 55% to 76% (higher in some cases) in other words earn £1 keep 24p to 45p.

One thought on “Laffing all the way”